RF ablation is the most commonly employed ablation technology in the United States and worldwide. It is based on the same principles as standard surgical electrocautery: electric current is conducted into the body via an electrode and exits through ground pads that are usually placed on the lower extremities. Ionic agitation causes tissue heating, resulting in near-instantaneous cell death when tissue temperatures reach 60 °C. Temperatures between 46-60 °C are also associated with cell death but require longer exposure times (18). Tissue heating is greatest in the area immediately surrounding the electrode because of a relatively high current density in this region, and there is an exponential drop of heating towards the thermal lesion periphery when a single electrode is used. RF ablation can be safely performed at laparotomy, laparoscopy, or percutaneously in a minimally invasive fashion due to its inherent cauterizing effect (19-21). When applied percutaneously, patients can often be treated on an outpatient or limited-stay basis.

The success of clinical RF ablation therapy has been mixed. A systematic review of the clinical RF ablation literature between 1995 and 2002 reported local failure rates after treatment of malignant liver tumors ranging from 0-34 percent (22). Several reasons for the high local recurrence rate seen with RF ablation include the heat sink effect of local blood flow (23-26), difficulty in ultrasound imaging of RF ablation zones (26,27), and evidence of surviving tumor cells even within RF ablation zones (28). As RF ablation technology has improved, the ability to create larger and more reliable zones of coagulation has increased. One promising development is the introduction of multiple-electrode RF systems based on switching technology (29-33), created here at Wisconsin. These systems power a single electrode to an impedance spike before switching to another electrode. This allows large powers to be used at each electrode while thermal synergy between electrodes creates a larger zone of ablation than is possible with sequential, overlapping ablations (33). 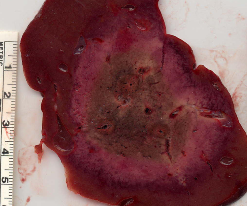 Because the field of tumor ablation is relatively new, long-term survival data has not been available to date. Data presented at the 2004 Radiological Society of North America Annual Meeting strongly suggests a long-term survival advantage for patients with hepatic colorectal metastases treated with RF ablation. One series reported 1, 2, 3, and 5-year survival of 96.2, 64.2, 45.7 and 22.1 percent respectively with a median survival of 33 months (34). The subgroup consisting of patients treated after January 2000 had survival rates at 1, 2 and 3 years of 94.5, 79.5, and 59.7 percent, respectively. This 3-year survival rate appears to approach the survival rates reported in the surgical literature after hepatic resection (23). A second investigator at the same meeting reported similar results with a 5-year survival rate of 24.1 percent after RF ablation of hepatic colorectal metastases (35,36). Advancements in RF ablation technology are clearly improving the efficacy of procedures.

The major limitation to the success of RF ablation (and other thermal therapies) to date has been an inability to create a large and hot enough zone of ablation. This basic limitation must be overcome before ablation therapies will consistently approach the results obtained at surgical resection. Similar to the surgical removal of tumors, physicians who apply ablation techniques must have confidence that targeted tumors will be completely destroyed along with an ablative margin (analogous to a surgical margin). Recent improvements to ablation technology, particularly in the field of microwave ablation, have allowed physicians to target larger tumors, but the current state of ablation technology should still be considered to be in adevelopmental phase.