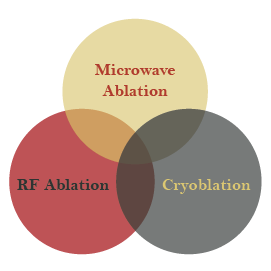 Cancer represents a significant societal cost in the United States and worldwide. Approximately 246,880 people will die from cancers of the colon, liver, lung, and kidney in the US in 2012 (1) and many of these patients will not be candidates for curative surgical resection due to age and infirmity. Over the past 2 decades, the use of image-guided tumor ablations has grown, demonstrating that tumors can be effectively treated in a minimally-invasive fashion with little or no morbidity and short recovery times. Because of these advantages and advancing technologies, interest in ablative therapies has burgeoned in recent years.

Radiofrequency (RF) ablation was the first technology devised for heat-based percutaneous tumor ablation. Early RF ablation devices were single electrodes that were very simple to use for physicians skilled in image-guided biopsy techniques. However, because RF power and temperature decrease rapidly away from a single electrode, inadequate heating at the tumor margins resulted in a large number of treatment failures. This resulted in a growing interest in the use of multiple applicators and new energy sources, with the University of Wisconsin demonstrating leadership in this field evidenced by a large number of Patents and Publications.

Focal tumor ablation has gained increasing popularity for the minimally invasive treatment of malignancies in the neck, chest, abdomen, and musculoskeletal system. While most commonly used for the treatment of malignant liver and kidney tumors, other applications include ablation of breast cancer, lung tumors, soft tissue metastasis, osteoid osteomas, and bone metastases. The low complication rate of image-guided tumor ablation makes this the ideal modality for treating benign neoplasms, such as hepatic hemangioma and adenoma.

In our laboratory we develop and test new devices for image-guided tumor ablation while translating these inventions to treat patients in the clinical environment. We have several collaborations
within other academic departments at the University of Wisconsin as well as
with various industry partners.  Our goal is to invent and test virtually
any type of device to direct energy to tumors with the intent of prolonging
human life.